Start your investment and trading journey with a deep education on financial market.
The beginner's guide to Forex market
Home > Bullish Candelistick Pattern

The candlestick patterns can be divided into:

Below are the different types of bullish reversal candlestick patterns:

Hammer is a single candlestick pattern that is formed at the end of a downtrend and signals bullish reversal. The real body of this candle is small and is located at the top with a lower shadow which should be more than twice the real body. This candlestick chart pattern has no or little upper shadow. The psychology behind this candle formation is that the prices opened and sellers pushed down the prices. Suddenly the buyers came into the market and pushed the prices up and closed the trading session more than the opening price.

This resulted in the formation of bullish pattern and signifies that buyers are back in the market and downtrend may end. Traders can enter a long position if next day a bullish candle is formed and can place a stop-loss at the low of Hammer. 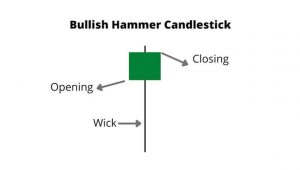 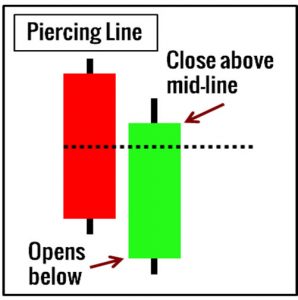 The bullish engulfing candle appears at the bottom of a downtrend and indicates a surge in buying pressure. The bullish engulfing pattern often triggers a reversal in trend as more buyers enter the market to drive prices up further. The pattern involves two candles with the second candle completely engulfing the body of the previous red candle. 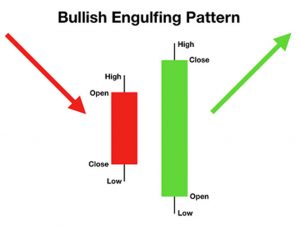 The Morning Star is multiple candlestick charts pattern which is formed after a downtrend indicating bullish reversal. It is made of 3 candlesticks, first being a bearish candle, second a Doji and the third being a bullish candle. The first candle shows the continuation of the downtrend, the second candle being a doji indicates indecision in the market, and the third bullish candle shows that the bulls are back in the market and reversal is going to take place. The second candle should be completely out of the real bodies of the first and third candles.

The Three White Soldiers is a multiple candlestick pattern that is formed after a downtrend indicating a bullish reversal. These candlestick charts are made of three long bullish bodies which do not have long shadows and are open within the real body of the previous candle in the pattern.

The White Marubozu is a single candlestick pattern that is formed after a downtrend indicating a bullish reversal. This candlestick has a long bullish body with no upper or lower shadows which shows that the bulls are exerting buying pressure and the markets may turn bullish.

An Inverted Hammer is formed at the end of the downtrend and gives a bullish reversal signal. In this candlestick, the real body is located at the end and there is a long upper shadow. It is the inverse of the Hammer Candlestick pattern. This pattern is formed when the opening and closing prices are near to each other and the upper shadow should be more than twice the real body.

The on neck pattern occurs after a downtrend when a long real bodied bearish candle is followed by a smaller real bodied bullish candle which gaps down on the open but then closes near the prior candle’s close. The pattern is called a neckline because the two closing prices are the same or almost the same across the two candles, forming a horizontal neckline.