Start your investment and trading journey with a deep education on financial market.
The beginner's guide to Forex market
Home > Elliot Wave Theory

Elliott Wave theory is one key method of forming market predictions, with a host of rules and complimentary theories providing a key tool for technical analysts.

Elliott Wave theory was established in the 1920s and 1930s by stock market analyst, Ralph Nelson Elliott, who believed that there was a more common structure to markets than the chaotic form seen by most other analysts at that time. His work on cycles and waves remains one of the most popular methods with which technical analysts can view financial markets, despite there being a range of views over the efficacy of his techniques.

Elliott saw that there is typically an impulsive wave which moves with the trend, followed by a corrective wave which is counter-trend. He saw that there is typically five waves that make up one larger impulsive wave, before a three-wave corrective phase. The ability to see the first five waves as one impulsive move highlights the fractal nature, given that you are expected to see the same patterns on a smaller and larger timeframe.

Elliott believed that every action is followed by a reaction. Thus, for every impulsive move, there will be a corrective one.

Once the 5-3 move is complete, we have completed a single cycle. 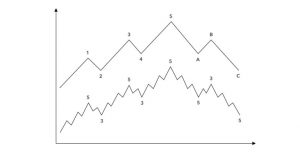 Interestingly, the fact that the corrective wave has three legs can have implications for the wider use of highs and lows for the perception of trends. Thus, while the creation of higher highs and higher lows will typically signal an uptrend, Elliott Wave theory highlights that you can often see the creation of a lower high and lower low as a short-term correction from that trend. This does not necessarily negate the trend, but instead highlights a period of retracement that is stronger than the previous corrections seen within the impulsive move.

The image above shows a break below the start point of the wave sequence, thus negating the notion that it is wave 1.

Wave 3 cannot be the shortest of the three impulse waves.

The image above highlights the instance when we see a third wave that is too short, thus negating the possibility that this is a correct wave count. Therefore, the subsequent waves remain part of the third wave rather than forming 4 and 5.

Wave 4 does not cross the final point of wave 1. 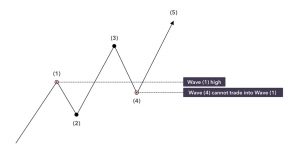 The break below the wave 1 point clearly negates the classification of the fourth wave, instead remaining within wave 3.

Elliott assigned a series of categories to the waves, which highlight the fact that you will see the same patterns within both long-term and shorter-term charts. The categories are as follows.

The use of corrective waves highlights the potential cross-study of Fibonacci retracements. Elliott didn’t specifically utilise Fibonacci levels, yet traders have applied them as a way to add greater complexity to the traditional theory.

The rules previously specified highlight which Fibonacci retracement levels could be used at different points in the trend. Given rule three, a trader would be looking for a fourth wave to be relatively shallow, with the 23.6%-50% levels of particular interest. We can also look for the correct A, B, C move to be a 50%-61.8% retracement of the entire 1-5 impulse move.

Elliott Wave theory is something that continues to provide a sense of structure to markets for a lot of people worldwide. The ability to constantly shift the theory when a rule is broken can hinder the use of the theory as a means to place trades. However, it also adds a significant degree of clarity to the art of trend recognition. How much complexity a trader wishes to add to Elliott’s initial rules is up to them, yet it is certainly a method that many choose to place front and centre in their market strategies.