Start your investment and trading journey with a deep education on financial market.
The beginner's guide to Forex market
Home > Fibonacci Retracement

The Fibonacci series is a sequence of numbers starting from zero arranged so that the value of any number in the series is the sum of the previous two numbers.

The Fibonacci sequence is as follows:

Needless to say, the series extends to infinity. There are few interesting properties of the Fibonacci series.

Divide any number in the series by the previous number; the ratio is always approximately 1.618.

The ratio of 1.618 is considered as the Golden Ratio, also referred to as the Phi. Fibonacci numbers have their connection to nature. The ratio can be found in the human face, flower petals, animal bodies, fruits, vegetables, rock formation, galaxy formations etc. Of course, let us not get into this discussion as we would be digressing from the main topic.  For those interested, I would suggest you search on the internet for golden ratio examples, and you will be pleasantly surprised. Further into the ratio properties, one can find remarkable consistency when a number is in the Fibonacci series is divided by its immediate succeeding number.

Similar consistency can be found when any number in the Fibonacci series is divided by a number two places higher.

Also, consistency is when a number in the Fibonacci series is divided by a number 3 place higher.

It is believed that the Fibonacci ratios, i.e. 61.8%, 38.2%, and 23.6%, finds its application in stock charts. Fibonacci analysis can be applied when there is a noticeable up-move or down-move in prices.  Whenever the stock moves either upwards or downwards sharply, it usually tends to retrace back before its next move. For example, if the stock has run up from Rs.50 to Rs.100, it is likely to retrace back to probably Rs.70 before moving Rs.120.

‘The retracement level forecast’ is a technique that can identify upto which level retracement can happen. These retracement levels provide a good opportunity for the traders to enter new positions in the trend direction.  The Fibonacci ratios, i.e. 61.8%, 38.2%, and 23.6%, help the trader identify the retracement’s possible extent. The trader can use these levels to position himself for trade.

Have a look at the chart below:

I would now define the move of 109 (380 – 489) as the Fibonacci upmove.  As per the Fibonacci retracement theory, after the upmove one can anticipate a correction in the stock to last up to the Fibonacci ratios. For example, the first level up to which the stock can correct could be 23.6%. If this stock continues to correct further, the trader can watch out for the 38.2% and 61.8% levels.

Notice in the example shown below, the stock had retraced up to 61.8%, which coincides with 421.9, before it resumed the rally.

We can arrive at 421 by using simple math as well –

Likewise, we can calculate for 38.2% and the other ratios. However one need not manually do this as the software will do this for us.

Here is another example where the chart has rallied from Rs.288 to Rs.338. Therefore 50 points move makes up for the Fibonacci upmove. The stock retraced back 38.2% to Rs.319 before resuming its up move. 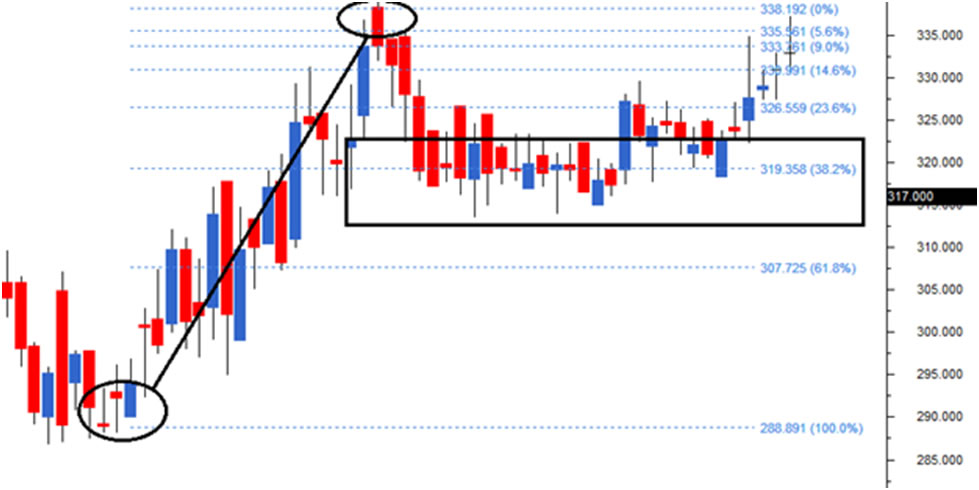 The Fibonacci retracements can also be applied to falling stocks to identify levels upto which the stock can bounce back. In the chart below (DLF Limited), the stock started to decline from Rs.187 to Rs. 120.6 thus making 67 points as the Fibonacci down move.

After the down move, the stock attempted to bounce back retracing back to Rs.162, which is the 61.8% Fibonacci retracement level.

How should you use the Fibonacci retracement levels?

Think of a situation where you wanted to buy a particular stock, but you have not been able to do so because of a sharp run-up in the stock. The most prudent action to take would be to wait for a retracement in the stock in such a situation. Fibonacci retracement levels such as 61.8%, 38.2%, and 23.6% act as a potential level upto which a stock can correct.

I would buy a stock only after it has passed the other checklist items. In other words, my conviction to buy would be higher if the stock has:

Along with the above points, if the stoploss also coincides with the Fibonacci level, I know the trade setup is well aligned to all the variables, and hence I would go in for a strong buy. The word ‘strong’ usage indicates the level of conviction in the trade set up. The more confirming factors we use to study the trend and reversal, more robust is the signal. The same logic can also be applied for the short trade.